Talk about conflicting advice. Squats are the most commonly used exercise in strength and conditioning programs for sports performance, occupational tasks and daily living. Yet some people will tell you they’re dangerous and to stay away from them. What should you believe? 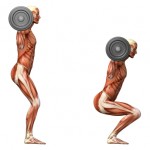 The problem can be traced back to the 1960s when Karl Klein, an oft-published professor, claimed that performing full (below parallel) squats was dangerous and damaging to the knee. But over the years, the field of exercise science has developed along with its research. And it turns out that Klein was wrong.

While some people may experience pain when learning to squat, this is not a telltale sign that damage is being done. What the pain really means is that either the technique is incorrect or there is an issue with joint flexibility.

Contrary to Klein’s belief, current research supports training programs involving full squats. Squatting below parallel strengthens the ligaments of the knee, decreases joint laxity and decreases contact pressure at the joint. In fact, the greatest pressure at the knee occurs at an 80- to 90-degree bend.

A narrow squat stance (feet hip-width apart) allows the knees to move forward and decreases backwards movement of the hips, placing the weight in the centre of the foot. This stance evenly distributes the effort of the hip, knee and ankle musculature for safe and efficient movement.

A wide squat stance (feet greater than hip-width apart) will have less forward knee movement resulting in a greater backward shift of the hips, placing the weight distribution in the heel. This stance reduces the amount of ankle bend and consequently increases the demands on the hip and knee. The wide squat stance often results in increased contact pressure at the knee joint and inner knee strain, often associated with injuries.

Simply put, if squats are causing you pain you have to address the problem. A certified kinesiologist will be able to assess flexibility along with muscle weaknesses and/or imbalances, and will teach you the proper technique. The result will be stronger hips, knees and ankles, without worrying about injury.